The Mystery of Magazine Numbers Revealed

BoSacks Speaks Out:  My friend Samir Husni has penned a short essay and complaint about "numbers" used in our industry for purposes of industry review and analysis (See below). He bemoans the way some media reporters publish stats on the number of new titles in each quarter, and he wishes that they reached out to him for his extensive collected number of new launches. I suggest that his collection of data is very large, unique and probably the most definitive.

It is true that the numbers we read in the trade press are varied and terribly inconsistent. From my perspective as an industry insider, it has always been fun to see the numbers and the constant surplus of new titles. That being said, I am using Samir's essay to launch my own observations about data in our industry in a week of many numbers which, although interesting to read, are for the most part irrelevant and misleading.

In fact, the number of new magazines we make is a red herring to our actual vibrancy. The only stat that matters is how many magazines we sell, and those numbers have been dropping since 2007 to a loss of over 50% in newsstand sales and, depending upon who you talk to, 18% in subs.

Next let's discuss this week's uplifting report about researchers who found among other nice-to-read data that 79% of those surveyed said they felt most relaxed when reading print and 78% said that given a choice they would prefer to read on paper. If wishes were print magazines we would/should be rolling in dough. We ain't, and surveys like this don't represent the reality of the situation despite the "feelings" of the respondents. They say one thing and do another. Print is indeed loved by many, but that love doesn't transfer into time spent with print, which has dropped every year that stat has been tracked. The last report by Mary Meeker states that of all time we spend with any media, only 4% is spent with print while 48% is spent with digital, and the rest is with TV (37%) and radio (11%) 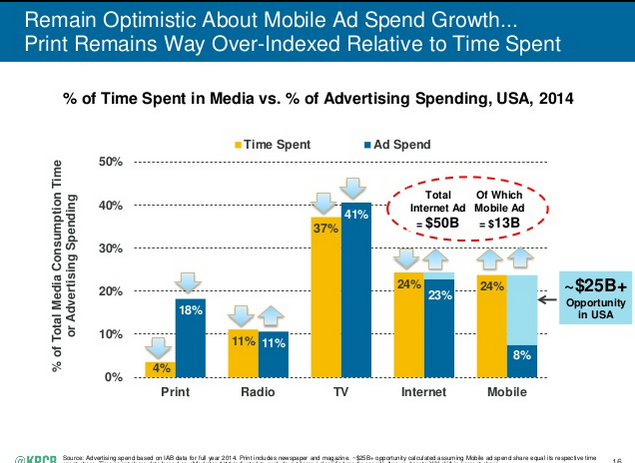 Lastly I would caution about industry statements that claim, "We can confirm, with credible third-party data, that our relationships with consumers across multiple platforms and formats (including print) are strong, enduring, and expanding."

Actually that isn't entirely accurate, or at least not entirely meaningful. It would be true, if you exclude print. Sure we have millions of friends in the digital sphere/ and those numbers grow all the time. In that I'm happy to agree. But print as an industry is down in every single category. Newsstand is down 50%, subs are down in the range of 18% and, as reported by Kantar media just yesterday, advertisers are cutting their spending in magazines at a faster rate than they have been in the last few years. The research firm's quarterly report shows that ad spending in print magazines was down 8.7 percent year-over-year through the first three months of 2015.

It is my belief that it is disingenuous to throw print and digital numbers together and say that everything is great for magazine media.

Now that I have presented a most depressing picture, let me offer the positive side of the situation. There are thousands of titles and hundreds of companies that are doing well and thriving contrary to the overall negative stats of the industry. Publishers still make billions of dollars with the core print product and will for the foreseeable future.

My conclusion is this: Most stats and most surveys don't mean a damn thing. If you think we are fooling the ad agencies with fluff industry numbers, I suggest you revisit Kantar and look at the increased trend of advertisers cutting their spending in magazines faster now than in many years, despite the beautiful plumage of millions of likes and Facebook interactions. 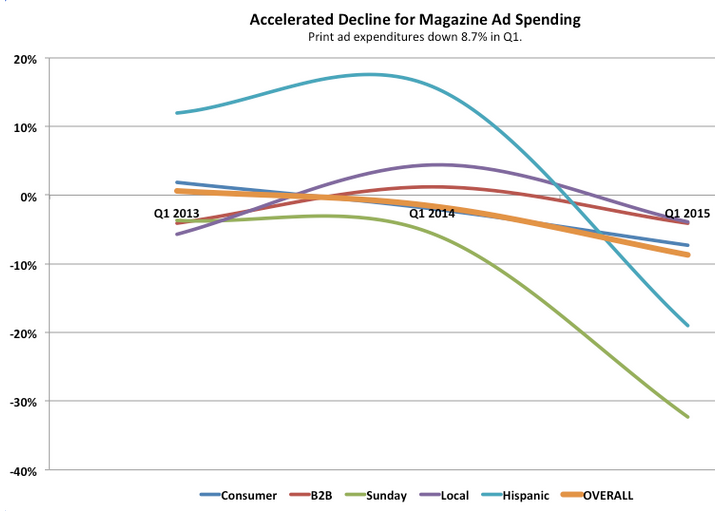 We are still a great industry with a great future ahead of us. A future filled with enormous revenue possibilities that we have yet to explore. But we will not achieve the next golden age of publishing if we continue to kid ourselves about where we are and where we are going. The lucrative future of magazine media is ahead of us, not behind in an ever diminishing legacy business. The simple fact is that the sky isn't falling, but neither are things amazingly wonderful. In a way, things are as they have always been - some titles die and others thrive. If you can accept that rule of Business 101, full speed ahead.

In a week or so I will publish specific recommendations for newsstand and other publishing business opportunities. I intend to explore the who, the what, and the where of successful magazine entrepreneurs that are thriving in this challenging time. Stay tuned.

Words have no power to impress the mind without the exquisite horror of their reality.